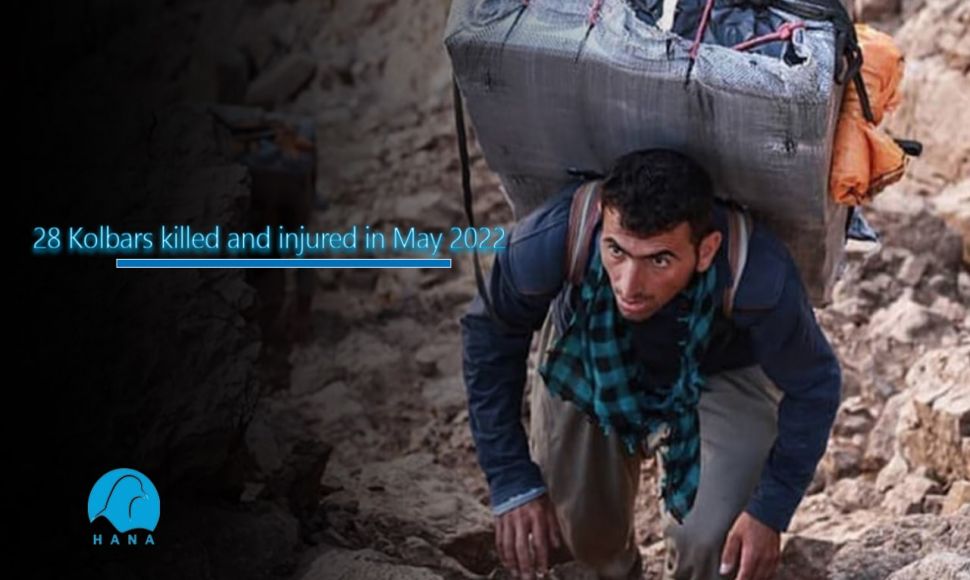 Statistics of Kolbar casualties in May, 2022

Hana: The Statistics Center of the Hana Human Rights Organization publishes monthly statistics on human rights incidents and events in all four provinces of Iranian Kurdistan. This statistic has been prepared with the utmost efforts of Hana's colleagues, and certainly due to the existence of censorship in Iran, it can not cover all events, happenings and events.
In this section, the Statistics Center of the Hana Human Rights Organization presents the statistics of casualties of Kurdish border courier known as Kolbar in May 2022.
According to these statistics, in May, 2022, A total of 28 Kolbars were killed and injured during the kolbary.
All of the killed and wounded are male.
Out of a total of 28 people, 2 people were killed and 26 people were injured, which are:

The highest number of casualties (killed and wounded) in May 2022,  is related to urban villages in Kermanshah and Sanandaj provinces.
It should be noted that one of the killed Kolbar (Behlool Seydani-Fard) along with 2 other Kolbars Barzan Mihani and
Asad Seydani-Fard disappeared on the border between Iran and Turkey on January 23, 2022. Barzan Mihani's dead body was found on April 6, 2022, and Behloul Seyedanifard on May 28, 2022 after 135 days, and the third person's body has not yet been found.

Kolbari is the phenomenon of systematic poverty and unemployment in Kurdistan, and people are forced to seek refuge in Kolbari, while government officials are not making any effort to solve the livelihood problems of the People of Kurdistan, and the killing of Kolbars has become common news, and this is a dangerous alarm for the people of Kurdistan. Police forces, revolutionary guards, or Border Guards directly shoot the Kolbars and kill or injure a number of them every day.
Hana Human Rights Organization
1, june, 2022
http://www.hana-hr.org
news@hana-hr.org
Use of this statistic is free, provided the source is acknowledged