A Statistical Report on 75 Days of Protests in Iranian Kurdistan 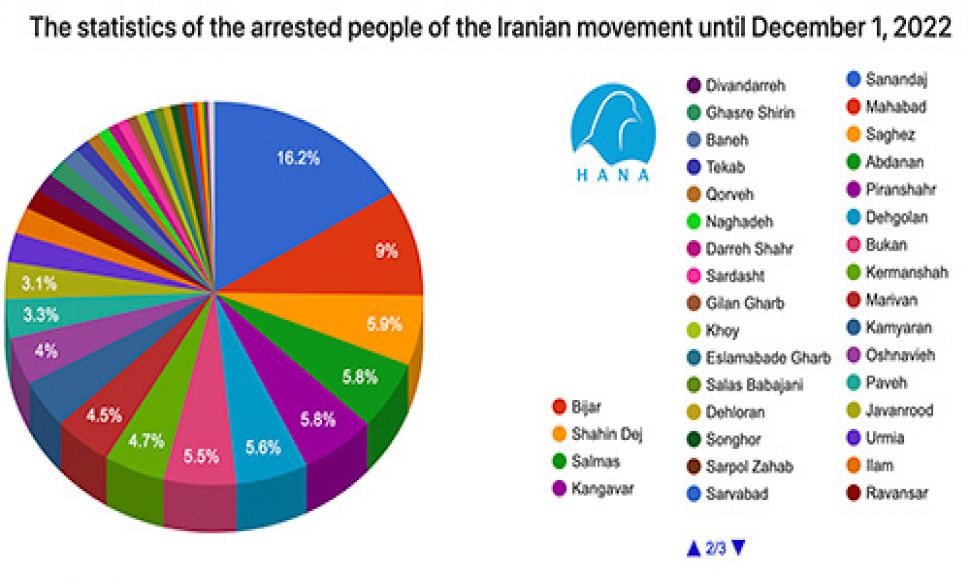 It should be noted that due to the lack of free access to news sources, the lack of freedom of media activities, and especially the strict control over the internet and social media networks, the statistics provided cannot include all cases of human rights violations, but all the efforts of colleagues and Hana's local reporters were applied so that the recorded cases to be accurate and verified.
Arrests: in the past 75 days, approximately 5,000 people have been arrested by security forces, police forces, IRGC intelligence and plainclothes. Among these individuals, the identity of 1021 people have been verified to Hana Human Rights Organization and been registered on the Hana's statistics centre.
Those who have lost their lives: During the two months and 15 days of nationwide protests in Iran, 469 people died. Of these, 133 were Kurds who were murdered by repressive government forces. A number of those killed were killed by direct gunfire, some died from blows caused by batons and other suppression devices, and a number died of torture in prisons. Some of the victims were those who were injured during the street protests and died due to the severity of their injuries a few days after being injured and the lack of doctors and medicine.

Injured: For security and preservation of the lives of the wounded, we did not have to register their names. The exact extent of the injured is also unclear, but the number is estimated to be more than 3,000.

Women: The identities of 84 women who were arrested during the protests are verified by Hana.
Also, 9 out of 133 people killed during this period, were women.

Children: Violence by government forces against children has no border, during which a total of 64 children (children under the age of 18) were killed by repressive forces throughout Iran, of which 22 were Kurdish children.
Cities: In 39 cities, these four provinces have protested and protests have taken place, with the highest number of arrests registered in Sanandaj, 170, Mahabad 90, Saqqez 59, Abdan 58, Piranshahr 58, Dehgolan 56, Bukan 55 Kermansha 47, Marivan 45 and Kamyaran 41, Ashnavi 40, Paveh 36, Javanroud 31, Urmia 25, Ilam 21, Ravansar 17, Ban 16, Divandaroud 16, Qasr Shirin 15 people and the rest of the cities with fewer figures. (It should be noted that these statistics only relate to those whose names and details have been obtained for Hannah)

Statistics Center of Hana Human Rights Organization
December 2, 2022
Citation of these statistics is free by mentioning the source.