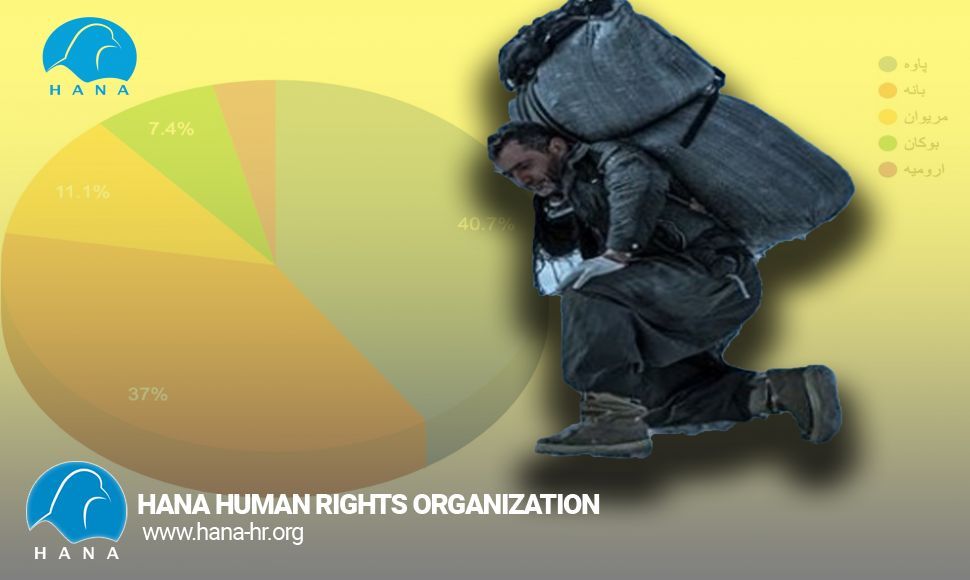 Hana: Hana human rights organization's statistical center publishes statistics related to human rights incidents and events in all four provinces of Iranian Kurdistan every month. These statistics have been prepared with the utmost efforts of Hana's colleagues, and due to the existence of censorship in Iran, it cannot include all events.

In this section, Hana Human Rights Organization statistics center presents the statistics of the casualty of the Kurdish border couriers known as Kolbar in June 2022 in different regions of Kurdistan provinces that have been registered in this statistics center.
According to these statistics, in June 2022, a total of 27 Kolbers were killed, wounded and beaten by the forces of the Islamic Republic.
All cases of killing and wounded are male.
Out of a total of 27 people, 5 people were killed, 19 people were injured and 3 people were arrested.

The highest number of casualties (killed and wounded) in June 2022 is related to border towns and villages in the provinces of Sanandaj, Kermanshah and Urmia, respectively:

Kolbari is a phenomenon resulting from systematic poverty and unemployment in Kurdistan, and people take refuge in Kolbari out of necessity, while the government officials do not make any effort to solve the livelihood problems of the people of Kurdistan, but they have also made the killing of Kolbars a regular news and this call It is dangerous for the people of Kurdistan. The police forces, the IRGC and border guards of the Islamic Republic shoot directly at Kolbars and kill or injure a number of them daily.
Hana Human Rights Organization
July 1, 2022
www.hana-hr.org (http://www.hana-hr.org/)
news@hana-hr.org
The use of these statistics is free by mentioning the source