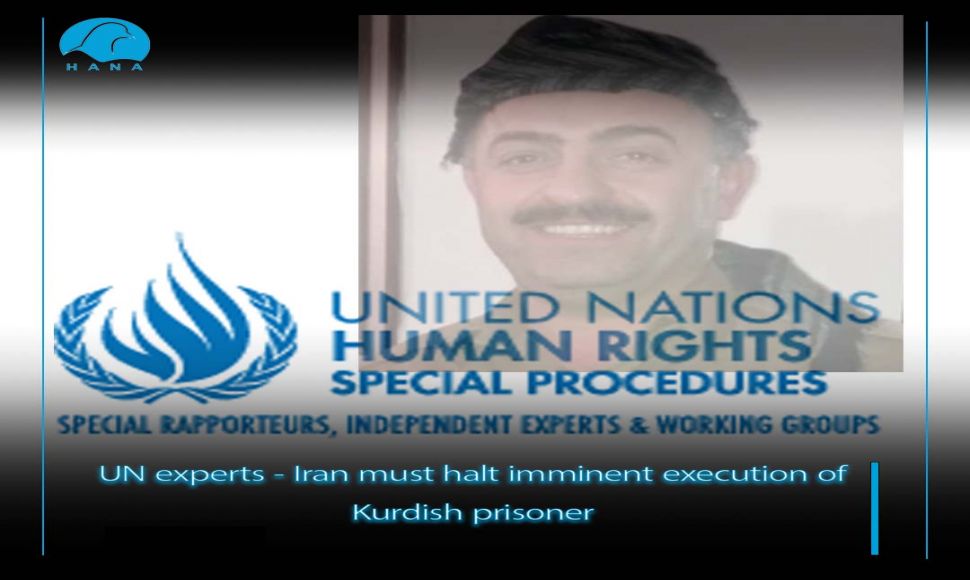 GENEVA (3 September 2021) - UN human rights experts* have appealed to Iran to halt the imminent execution of Iranian Kurdish prisoner Heidar Ghorbani and repeal his death sentence amid serious concerns that he did not receive a fair trial and was tortured during pre-trial detention.

“The Iranian authorities must immediately halt the execution of Heidar Ghorbani and annul the death sentence against him and grant him a retrial in compliance with their international obligations,” the experts said.

Mr. Ghorbani, 48, was arrested in October 2016 in connection with the alleged killing of three men affiliated to the Basij paramilitary forces reportedly by individuals associated with an armed opposition group. For three months after his arrest, he was subjected to enforced disappearance, as no information was provided to his family on his fate and whereabouts. He was reportedly held in solitary confinement and subjected to torture and ill-treatment.

“We are seriously concerned that Mr. Ghorbani’s eventual confession was forced as a result of torture and ill-treatment,” the experts said. They also expressed concerns about reports that Mr. Ghorbani was denied access to a lawyer during the investigation, and that his lawyer did not have full access to his case file during the trial.

In October 2019, a Criminal Court convicted Mr. Ghorbani of aiding and abetting murder, attempted kidnapping and assisting the perpetrators of the attack to escape. He was sentenced to a total of 118 years and 6 months in prison.

In January 2020, a Revolutionary Court in Kurdistan Province convicted Mr. Ghorbani of baghi (armed rebellion against the State) and sentenced him to the death. This is despite the court acknowledging in the verdict that Mr. Ghorbani was never armed.

Iran’s Criminal Code stipulates that in order to establish the crime of baghi, the defendant must be a member of an armed group and personally resort to arms. During his trial, Mr. Ghorbani denied all charges, stating that he was not a member of a Kurdish political organization and never had a weapon when the victims were killed.

“In the case of Heidar Ghorbani, many foundational guarantees of fair trial and due process enshrined in international human rights law appear to have been violated,” the experts said. “Allegations of torture and confessions extracted under duress are extremely concerning, as is the fact that these allegations did not lead to any investigation and appear not to have been considered by the Court during his trial.

“It is regrettable that the Government continues to issue death sentences,” the experts added. “This is particularly concerning when the crimes do not meet the threshold of the ‘most serious crimes’ as required by international law, including the International Covenant on Civil and Political Rights, to which Iran is a State party.

“It is also troubling that courts continue to issue death sentences in trials that not only breach international fair trial standards, but even domestic law and due process guarantees. Once again, we call on Iran to impose an immediate moratorium on executions and commute all death sentences.”

The experts have previously raised concerns with the Government of the Islamic Republic of Iran about the death sentence and fair trials violations against Mr. Ghorbani. The Government sent comments in response.

The Special Rapporteurs and Working Groups are part of what is known as the Special Procedures of the Human Rights Council. Special Procedures, the largest body of independent experts in the UN Human Rights system, is the general name of the Council's independent fact-finding and monitoring mechanisms that address either specific country situations or thematic issues in all parts of the world. Special Procedures' experts work on a voluntary basis; they are not UN staff and do not receive a salary for their work. They are independent from any government or organization and serve in their individual capacity.

Concerned about the world we live in?

Then STAND UP for someone’s rights today.

and visit the web page at http://www.standup4humanrights.org