Dr. Nasser Fahimi's letter to the President of the United States 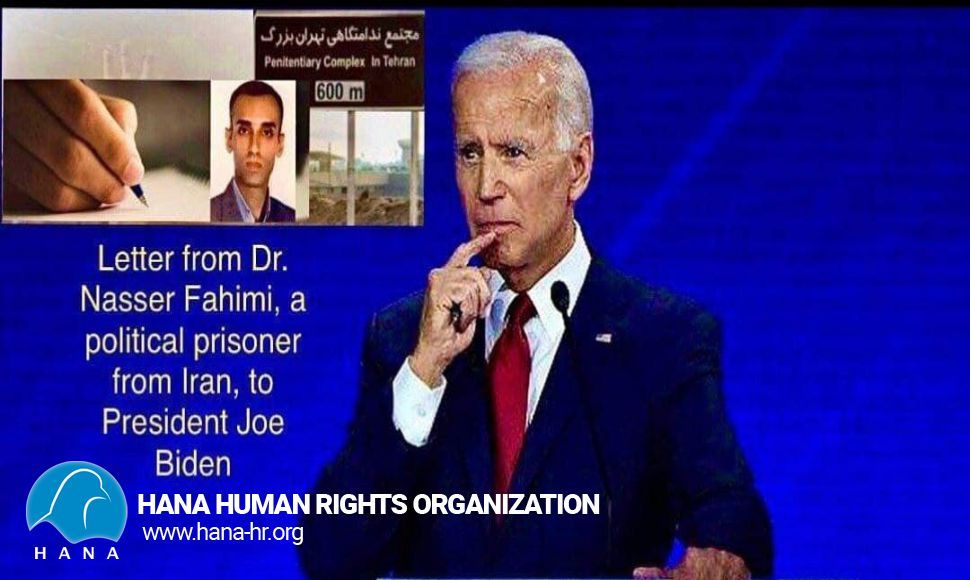 In an open letter to US President Joe Biden, Nasser Fahimi, a political and ideological prisoner imprisoned in Greater Tehran Prison late in his sentence, called for increased pressure on the Islamic Republic to change its regime to a secular democratic system, and to pay attention.  Special attention has been paid to the critical and inhumane situation of prisons inside Iran.

Part of the letter;
After 43 years of Islamic rule in Iran and the adoption of inhumane laws such as execution, stoning, amputation, issuance of severe illegal punishments, to run and survive the government, since the beginning of the revolution thousands of political activists, human rights activists, journalists  And those who criticize and protest the passage of inhumane sentences and the cruel administration of the government have been hanged;
We, the people of Iran, prisoners and thousands of political prisoners in similar and intolerable conditions, including Nasser Fahimi, a 46-year-old Sunni Muslim political prisoner, a doctor imprisoned in the Greater Tehran Prison (Fashafoyeh Type 5) for 11 years in the worst conditions.  Possible (denied access to family. Deprived of leave) with false accusations and orders and show and intensification of punishments for discrimination of ethnicity, Kurds and Sunnis, advocacy of human rights and liberal parties. Groups and organizations opposed to the Iranian regime  , We are serving heavy and false sentences in Iranian torture chambers,

In recent years, with protests and reactions from many countries to the government that contradicts the human rights of the Islamic Republic and the growing awakening of the Iranian people to stand up to oppression and demand their human rights, the Iranian regime to create social panic and resistance and resistance in  In the face of widespread civil and peaceful protests, illegal detentions, covert and overt killings inside and outside prisons, destabilizing the country and prisons in terms of health security, and tightening the living conditions of the nation under shadow,  To suppress more protesters and critics,

He stated in part of the letter:
While thanking for intensifying and continuing the pressure of the maximum and continuing the policies of previous governments towards the regime that violates Iran's human rights to isolate the government and re-support the Iranian people to exercise their rights and achieve a democratic and free government in human dignity,  I call for continued pressure on the Islamic Republic and the support of the majority of the oppressed people of Iran by the esteemed official and the international community.