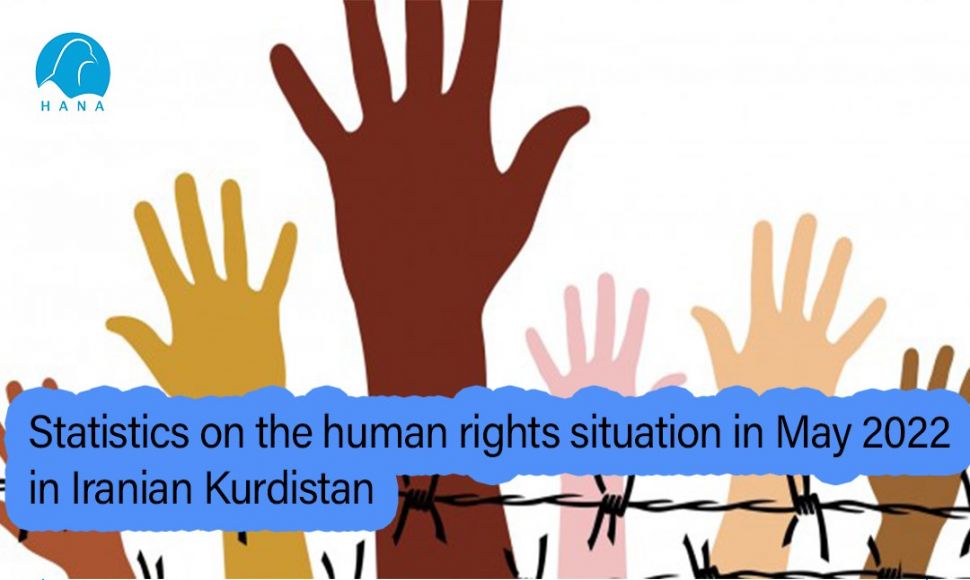 Hana: The Statistics Center of the Hana Human Rights Organization will publish its statistical report on the human rights situation and the violation of the fundamental rights of Kurdish citizens in May 2022, in Iranian Kurdistan.

(Wherever Kurdistan is mentioned, it refers to the provinces of Kermanshah, Ilam, Sanandaj (Kurdistan), and Urmia (West Azerbaijan). However, all the efforts of Hana's colleagues inside the country are aimed at making sure that the news is published and the published cases are verified.

According to statistics recorded by the Statistics Center of the Hana Human Rights Organization, at least 34 Kurdish citizens were arrested in May, 28 border couriers known as Kolbar were killed and injured, six  workers were killed while working,  at least two people were injured by landmine blasts, at least 13 people committed suicide, and seven people were killed in connection with family and honor issues.
Arrests:
In May, 2022, at least 34 Kurdish citizens were arbitrarily detained by the security services of the Islamic Republic of Iran without any arrest warrant issued by the court.
All of them have been identified by the Hana Human Rights Organization, most of whom have been arrested on charges of political activity, collaborating with Kurdish opposition parties in the Islamic Republic, as well as labor, trade union, civil, and environmental activities. According to these statistics, out of the total number of detainees, 16 were for political crimes, 14 were for trade union and civil activities, 1 was a women's rights activist, and one was a student activist.

Hanah Human Rights Organization Statistics Center
June, 01, 2022
It is free to cite these statistics by citing the source
http://www.hana-hr.org
news@hana-hr.org