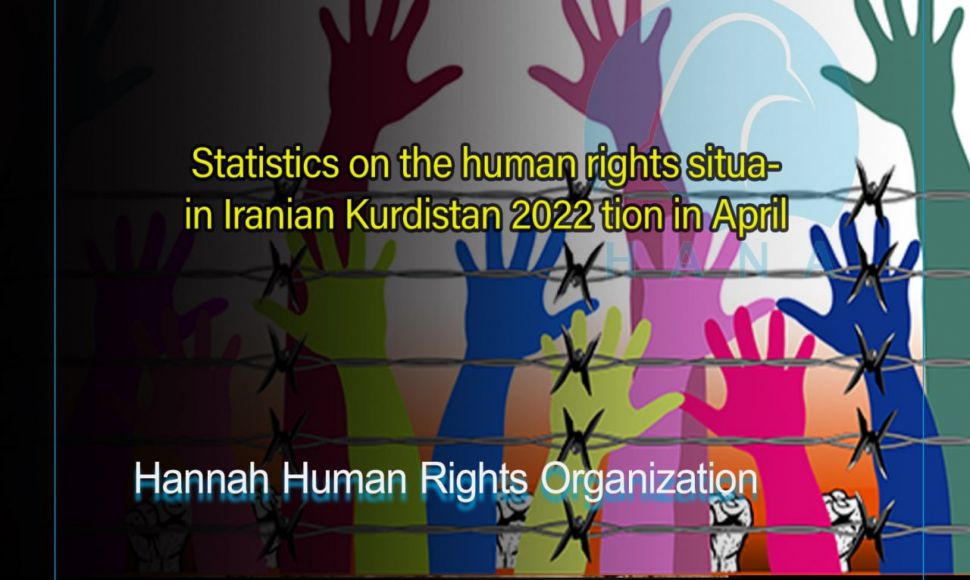 Hana: The Statistics Center of the Hana Human Rights Organization will publish its statistical report on the human rights situation and the violation of the fundamental rights of Kurdish citizens in April 2022 in Iranian Kurdistan. (Wherever the name of Kurdistan is mentioned, it refers to the provinces of Kermanshah, Ilam, Sanandaj (Kurdistan), Urmia (West Azerbaijan).

With the emphasis on the lack of free access to news and events inside the country, these statistics cannot include all violations of citizens' rights, but all the efforts of Hana's human rights colleagues inside the country are in order to be extremely careful in the insertion of news and fact-checking of published cases.

According to statistics recorded by the Statistics Center of the Hanna Human Rights Organization, at least 43 Kurdish citizens were arrested in April, 52 Kolbar (border courier) were killed and injured, two workers were killed while working, and landmine killed and injured at least two people.
Arrests:
As of April 2022, at least 43 Kurdish citizens had been arbitrarily detained by the security services of the Islamic Republic of Iran without any warrant for their arrest.
All of them have been identified by the Hana Human Rights Organization, most of whom have been arrested on charges of political activity and collaborating with Kurdish opposition parties in the Islamic Republic, as well as labor, civil, and environmental activities. According to these statistics, out of the total number of detainees, 16 were arrested on political charge, 15 were arrested for labor activities, 11 for civil and trade union activities, and 1 was for women activists.

Kolbar (border couriers)
According to Hana statistics, in April, 2022, at least 53 Kurdish border couriers known as Kolbar were killed and wounded.
Of these, five were killed, four of whom were killed by direct fire from Islamic Republic forces. In this month, 48 Kolbars have been injured. 46 of them were wounded by direct fire from the Armed Forces of the Islamic Republic, and two others were injured in natural disasters and car accidents. The highest number of Kolbar casualties is related to the border towns and villages of Kurdistan.
Women:
In April, 2022, at least four women were arrested and detained by security forces. All of them were detained for political reasons and in collaboration with Kurdish opposition parties in the Islamic Republic.
.
Suicide :
At least nine people committed suicide in cities and villages in Kurdistan in April, according to statistics recorded by the Hana Statistics Center. Of these, 5 were female and 4 were male. These suicides were due to livelihood reasons and family disputes.
Mine blast:
At least two civilians were killed and wounded by landmines and explosives left over from the Iran-Iraq war in April, according to statistics recorded by the Hana Statistics Center.
Most of the victims of these mines were Kurdish farmers, traders and farmers.
Workers:
According to statistics recorded at the Hana Statistics Center in April, at least 15 labor activists were arrested, and two Kurdish workers lost their lives due to work-related and unsafe workplace, and many were injured. .