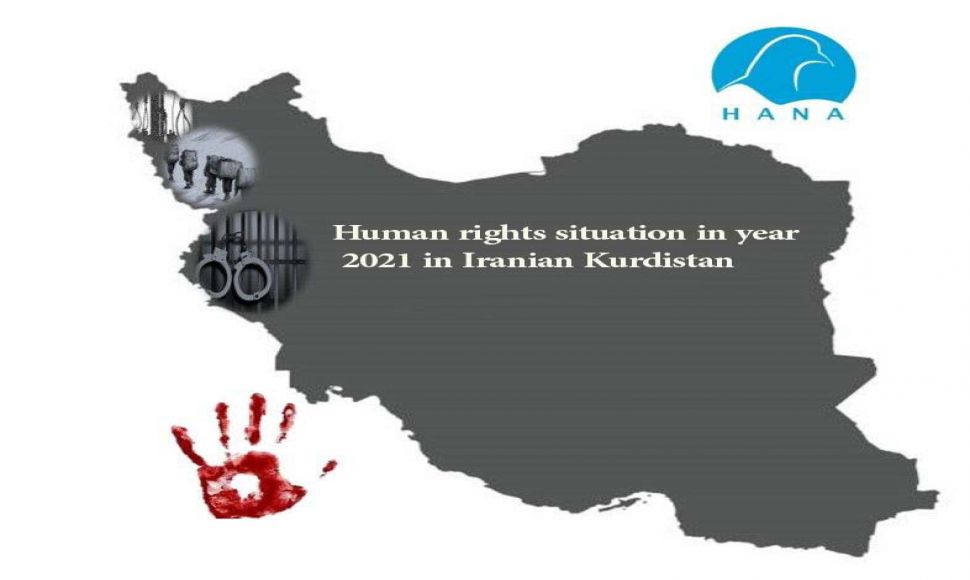 Hana: The Statistics Center of the Hana Human Rights Organization publishes its statistical report on the human rights situation and the violation of the fundamental rights of Kurdish citizens in year 2021 in Iranian Kurdistan. (Wherever the name of Kurdistan is mentioned, it refers to the provinces of Kermanshah, Ilam, Sanandaj (Kurdistan), Urmia (West Azerbaijan).)  Due to the lack of free access to news and events inside the country, these statistics cannot include all violations of citizens' rights, but all the efforts of Hana Human Rights Organization's colleagues inside the country are in this regard so that the utmost care has been taken in the insertion of news and verification of the published cases.

During the past year (2021), about 500 Kurdish citizens have been arbitrarily detained by the security agencies of the Islamic Republic of Iran without any arrest warrant issued by the court. The identities of 487 of these individuals have been established for Hana, most of whom have been arrested on charges of political activity and collaborating with Kurdish opposition parties in the Islamic Republic, as well as civil and environmental activities. According to these statistics, of the total number of detainees, 362 people were arrested for political crimes, 9 for religious activists, 79 for civil activists, 21 for environmental activists, 4 were women activists, and 12 were labor activists.

According to Hana statistics, in 2021, at least 44 Kurdish citizens had been executed in Iranian prisons. In the past year, a political prisoner named Haidar Ghorbani has been executed for political offenses, and the rest of the executions have been sentenced to death on 27 counts of premeditated murder and 16 counts of drug-related offenses.

In 2021, many abuses against Kurdish prisoners took place in the prisons of the Islamic Republic. From killing a prisoner under torture to physical and mental torture, depriving a prisoner of access to a doctor for treatment, depriving a prisoner of the right to leave, ventilation, and housing political prisoners in the ward of addicts and social criminals. In 2021, ten Kurdish prisoners were tortured to death in Iranian prisons; 1- Bahman Oghabi, 2- Mehrdad Taleshi, 3- Amir Rezaei, 4- Rahman Ahmadian, 5- Yaser Mangouri, 6- Shahin Naseri, 7- Amir Hossein Hatami, 82- Khosrow Jamali, 9- Davood Rahimi and 10- Asad Ramin .

According to Hana statistics, 214 Kurdish Kolbers and traders were killed and injured in 2021, of which 65 died and 149 were injured. Of these, 146 were killed or wounded by direct fire from the armed forces of the Islamic Republic. The highest number of casualties is related to the border towns and villages of Kurdistan, the most important of which are:

In the past year, at least 40 women have been arrested and detained by security forces. Of these, 9 were arrested for civic activities, 3 for women rights, 4 for environmental activities, and 24 for political reasons and cooperation with the Kurdish opposition parties.

In the past year, unfortunately, at least 30 women have been killed for honor by their families, fathers, brothers, and husbands.

According to statistics recorded by the Hana Statistics Center, at least 115 people have committed suicide in the cities and villages of Kurdistan in the past year. A large proportion of suicides were for livelihood reasons.

According to statistics recorded by the Hana Statistics Center, at least 31 civilians were killed and injured by landmines and explosives left over from the Iran-Iraq war in 2021. Of the 31 cases that occurred, 12 died and the rest were injured and some were disabled. Most of the victims of these mines were Kurdish farmers, traders and Kolbers.

According to statistics recorded at the Hana Statistics Center in 2021, at least three workers in Kurdistan have lost their lives due to work-related accidents and lack of safety at work, and many have been injured and poisoned.