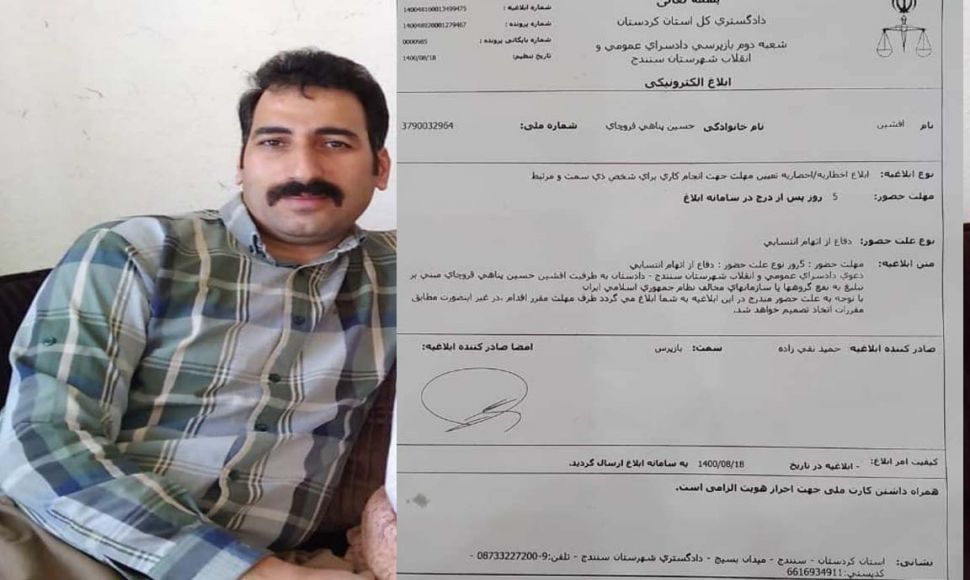 According to the campaign of Ramin Hossein Panahi; Afshin Hossein Panahi, a Kurdish civil activist, has been summoned to the Sanandaj Public and Revolutionary Prosecutor's Office.

The charge against this civil activist is "propaganda in favor of groups and organizations opposed to the Islamic Republic."
A member of Afshin Hossein Panahi's family said that after the death of our father and the abduction of the body and the protest of family members, especially Afshin, the security agencies had threatened to file a case against him again and we believe that Afshin will be summoned this time in this case.

This civil activist, who has a history of cooperating with environmental organizations, was sentenced to eight and a half years in prison in November 2017 in the First Branch of the Revolutionary Court of Sanandaj, presided over by Judge Saeedi, for "holding Nowruz ceremonies and collaborating with a Kurdish party."  According to Article 134 of the Islamic Penal Code, six years of it was applicable.

Mr.  Afshin Hosseinpanahi, a civil and environmental activist  On April 26, 2020 was released on parole after serving nearly three years in prison.

Afshin Hosseinpanahi had previously been detained by security agents at his private home on June 26, 2017, three days after Ramin Hossein Panahi was arrested.

This citizen was sentenced to one year in prison in 2011 following the case of the suspicious death of his brother "Ashraf Hossein Panahi" on charges of "propaganda against the regime" and was released from prison at the end of his sentence.

Ramin Hossein Panahi, a Kurdish activist and the younger brother of Afshin Hossein Panahi and a political activist, was a 24-year-old born in the village of Qorochai in Dehgolan, who was executed at dawn on Saturday, September 8, 2018, along with Zanyar and Loghman Moradi, two other political prisoners at Rajai Shahr Prison in Karaj.