29 Woman victim of violence in the past year in Kurdistan 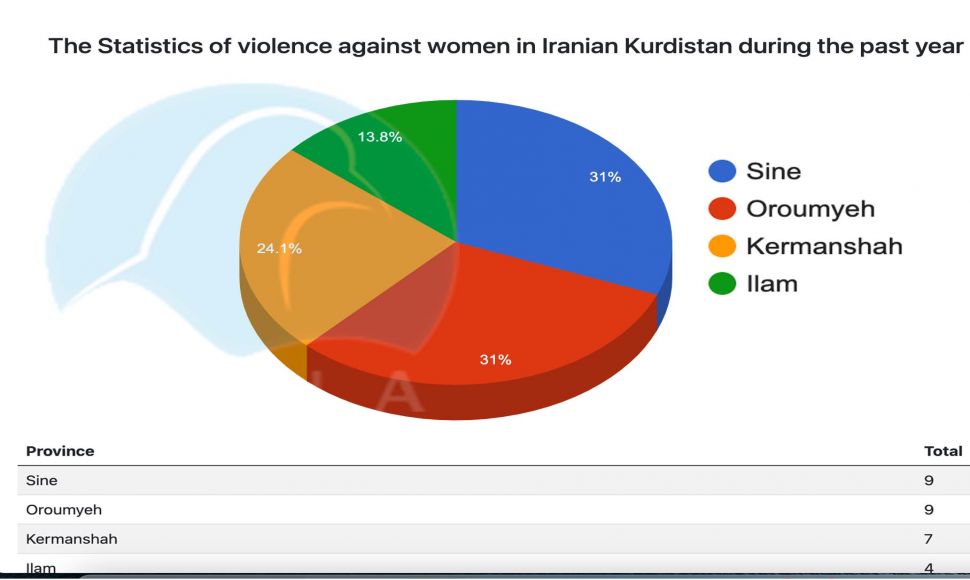 The statistics, recorded at the Hana Statistics Center for Human Rights, include only those that resulted in the murder of a woman,  Other forms of violence, domestic violence, beatings, harassment by family members or husbands, verbal and psychological violence are not included in these statistics, and basically this type of violence is not included anywhere nor this type of violence reported in the media. According to the Hana Human Rights Organization, a total of 29 cases of violence against women have been registered in four provinces of Kurdistan in the past year, all of which resulted in the murder of a woman by a family member. Most of the recorded murders were committed out of honor.
Out of a total of 29 cases:
9 cases have been committed in Sanandaj province (Kurdistan) which constitutes 31% of the total statistics.
Orumyeh Province (West Azerbaijan) 9 cases in which this province constitutes 31% of the total statistics.
Kermanshah province 7 cases which constitutes 24.1% of the statistics and Ilam province 4 cases which constitute 13.8% of the total statistics.
The Hana Statistics Center for Human Rights also charted the level of violence in cities in all four provinces. It should be noted that statistics related to cities do not necessarily mean that what happened in this particular city, but also include that city and its dependent villages.
Hana Human Rights Organization calls for an end to all forms of violence against women and holds the Government of the Islamic Republic of Iran responsible for the violation of women's rights and the continuation of violence against women.
Raising the awareness of citizens through education and social service programs, establishing organizations and institutions for the protection of women, building safe houses for vulnerable women are part of the basic human rights of individuals in society.
Hanah Human Rights Organization
November 25, 2021